The major share of Uralchem's social investments goes to charity. The Company's activities in this area are carried out within the framework of the following programs:
The charitable activities of the Company are regulated by the Charity and Sponsorship Policy and are carried out in accordance with the federal laws "On Charitable Activities and Charitable Organizations" and "On Advertising".

The company allocates part of its social investments to support employees of its enterprises. Programs in this area are developed taking into account the interests and needs of employees.

The total amount of social investments is 358.7 million rubles, including:

Uralchem ​​implements social and charitable programmes to support the population in the regions where it operates. All of our facilities regularly get together with local communities to understand the needs of people in the region and receive feedback on the activities of the branches, even at the stage of project planning.

If they have any questions, employees and other interested parties can call the hotline 8-800-250-28-98 or contact the Company on social networks.

The Company's charitable activities are regulated by the Charity and Sponsorship Policy and carried out in accordance with the federal laws "On Charitable Activities and Charitable Organizations" and "On Advertising".

Our approach to engaging with local communities

The Company determines the efficiency of spending on charity and sponsorship using the goals and principles that are set forth in the Policy. When choosing projects, Uralchem gives preference to the ones that have the greatest social impact.

In 2020, the Company allocated 358.7 million rubles for charity and sponsorship. 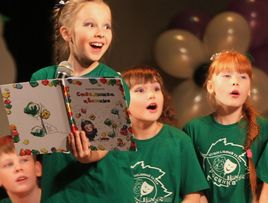 Assistance in the improvement and development of the social aspect is one of the main areas of the holding's charity activities. As part of the URALCHEM Supporting Children, the company's branches actively work with preschool and educational institutions, participate in organizing topical and entertaining city events, and provide support to municipal children's clubs and associations.

Since 2010, the KCKK Branch has been carrying out major repairs of premises in kindergartens, equipping new facilities. In 2020, several groups for toddlers were opened, corporate groups and the adjacent walking areas were renovated. Corporate groups are created under a cooperation agreement between URALCHEM, the Kirovo-Chepetsk administration and preschool institutions for a period of four years. After this time, the premises are handed over to the municipality.

Every year, URALCHEM works with educational institutions of Kirovo-Chepetsk city and its region. In 2020, five million rubles were allocated for the implementation of urban educational projects submitted for the grant competition. A similar competition was held among the schools of the Kirovo-Chepetsk region. As a result, a grant of 100,000 rubles was received by the Maly Konypa school for the renovation of the school chemistry and biology classroom. In September – November, the city hosted a large-scale project “URALCHEM and ME” with a distribution fund of more than 500,000 rubles, in which more than 100 families and 11 schools of the city took part.

Voskresensk Mineral Fertilizers plant provided aid to the “Equal Opportunities” Center for Social Assistance to Children with Disabilities in purchase of medical and rehabilitation equipment. In addition, the chemical plant acted as a partner of the children's holiday on the eve of the World Cerebral Palsy Day, and the plant workers arranged a New Year's surprise for the special children gifting the kids. Last fall, Voskresensk Mineral Fertilizers provided support to the New Generation club for teenager and youth in the improvement of their premises. The club located in the Khorlovo village is attended by over 7,000 children and teenagers every year.

PMU Branch rendered sponsorship assistance to the sponsored school No. 132 in the repair of the chemistry classroom and paid for installation of street workout complexes in three communities of the city. According to the plan of joint events of URALCHEM PMU Branch and the administration of the Industrial District, for the Victory anniversary, they renewed a thematic exhibition in the children's center “Rifey”, decorated the Mira street for the holiday, helped in organizing the presentation of commemorative medals to veterans, and planted an alley in V. L. Mindovsky park. 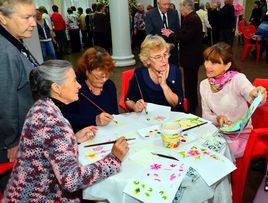 The PMU Branch provides financial support to the plant’s Council of Veterans, which numbers about 400 retirees. The company allocates funds for quarterly material assistance and rehabilitation of its former employees.

Social support is provided every year to the retired employees. In 2020, the Azot Branch allocated 16 million rubles for this purpose. More than 2,200 people are members of the company’s public organization of veterans. 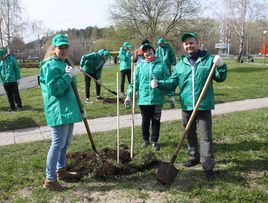 URALCHEM Program for Regions is another large-scale area of charity work. Within the framework of this program, social partnership agreements are signed annually between URALCHEM and the municipalities of the Kirov region, whose interests are represented in the regional parliament by deputies that are employees of the company. Based on these agreements, URALCHEM regularly helps the districts of the region in the implementation of socially significant tasks and projects in various areas — education, culture, sports, and provides assistance to socially vulnerable people. The "Good Harvest" event is held every spring in these regions. The residents in the age of 55 and over receive mineral fertilizers produced by the KCKK Branch for their gardens. In 2020, almost 40,000 women from the region took part in the event. As part of the signing of a trilateral social partnership agreement between URALCHEM, the Government of the Kirov region, and the Administration of the City of Kirovo-Chepetsk, 25 million rubles were allocated to the Kirovo-Chepetsk budget for the repair of roads, sidewalks, and educational institutions. The KCCW Branch provides assistance in the implementation of projects of regional and federal programs. For example, in 2020, six million rubles were allocated for the renovation project for the park on Pervomayskaya Street. The company cooperates with public organizations in the region and allocates funds for competitions and events.

Every year, Azot Branch provides financial assistance to the Perm regional youth movement League of Leaders, which implements socially beneficial initiatives. The organization arranges environmental campaigns, volunteer work with the elderly people and people with disabilities, other municipal and regional campaigns and events. The branch traditionally supports Azot cultural and sports center (CSC), which is visited by residents of the city. In 2020, the renovation of the sports club, the community center, and the ski base continued. Costs amounted to 33 million rubles. The enterprise's museum was repaired. Deputies of the Bereznikovskaya City Duma – Azot workers – are actively working in the city. Last year, with the financial support of the enterprise, children's playgrounds were installed, a competition “My yard is the most beautiful” was organized, New Year's greetings and gifts were sent to children from large and low-income families, etc. In addition, the people's deputies awarded certificates for the purchase of equipment for antiviral measures (bactericidal air re-circulators) to representatives of preschool and educational institutions located in their districts. 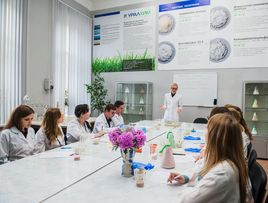 Within the framework of the URALCHEM Supporting Education and Science, in the regions of its presence, the company supports achievements in the field of chemistry studying and teaching. For example, in 2020, the PMU Branch awarded prizes to the eleventh grader, who won the regional stage of the All-Russian Olympiad for schoolchildren in chemistry, as well as the teacher, who trained him.

Every year, Voskresensk Mineral Fertilizers plant allocates significant funds under the URALCHEM Supporting Education and Science to help educational institutions of Voskresensk in the acquisition of equipment necessary for education. Khorlovskaya boarding school enjoys many years of friendship and fruitful cooperation with Voskresensk Mineral Fertilizers, and before the start of the new academic year it received a gift certificate for the purchase of school furniture, as well as equipment and a set of dishes for the school canteen. In honor of the 80th anniversary of the vocational education system, another gift certificate was presented to the staff of the Voskresenskiy College, which has been a source of personnel for the plant since Soviet times.

As part of the social partnership between Voskresensk Mineral Fertilizers JSC and the Voskresensk Education Department, the company implements joint scientific and educational projects, organizes contests and open lessons for kindergarten pupils, schoolchildren, technical schools and university students. In 2020, the plant workers helped organizing the scientific and educational game “Vivat, Science!” — a large-scale educational project of the natural science club of teachers and schoolchildren “Chembios”. Representatives of 28 educational institutions of Voskresensk took part in the intellectual competition.

The Azot Branch regularly interacts with the Bereznikovskiy Polytechnic College (BPC), the Perm National Research Polytechnic University (PNRPU) and its branch in Berezniki, the Bereznikovskiy Construction College, the Tomsk Polytechnic University, and other educational institutions. The plant provides financial support in the development of the material and technical base of educational institutions, awards students with personal scholarships for successful studies and active scientific research. The company also cooperates with the Education Department of the Berezniki City Administration. In 2020, the “Garden City. Heritage” project was organized to honor the famous Perm gardener Valentin Mindovsky and “Hello, my dear...” project was implemented as part of the year of memory and glory activities. Teachers were provided with financial assistance to hold the professional competition “Sails of Success”. 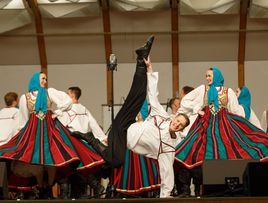 Under the patronage of URALCHEM, numerous public projects are being implemented for the patriotic education of young people. In 2020, the Voskresensk Mineral Fertilizers plant provided assistance to the patriotic center “Aquarium” in conducting military field training, as well as to the military search unit “Rubezh 2014” in organizing the Watch of Memory in the Smolensk region. URALCHEM allocated funds for the opening of a monument to the test pilot S. Rybnikov, who deceased in December 2014 during a test flight while taking a crushing plane away from residential buildings and a school in Chemodurovo village.

Amid the pandemic, within the scope of the URALCHEM Supporting Cultural Traditions, the Azot Branch organized the annual Chemfest city festival, holding it online.

The chemical plant also provided financial support to “Nadezhda” public organization of people with disabilities in the city of Voskresensk. The allocated funds were used to purchase floor tiles, plumbing equipment, heaters, and an exhaust ventilation device. 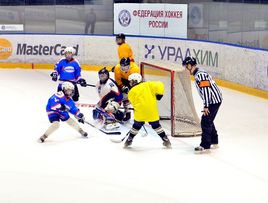 Support for children's sports is an important aspect of URALCHEM’s social policy. In Kirovo-Chepetsk, the KCKK Branch finances the work of children's hockey clubs, provides sponsorship in organizing and holding competitions in swimming, Greco-Roman wrestling, judo, football, and rhythmic gymnastics. For these purposes, more than five million rubles are spent annually.

The Azot Branch and PMU Branch provide financial and organizational support to the development of swimming in the Perm Territory. Through this assistance, the work of the regional Swimming Federation has been established. In 2020, five regional competitions were held with great success. Athletes of the national swimming team of the Perm Territory won 34 medals at regional and Russian competitions.

Paying special attention to the development of physical culture and sports, supporting a healthy lifestyle, Voskresensk Mineral Fertilizers, JSC became a partner of the series of “Kolominskie Ravines” competitions and the contest of fan posters in support of the Voskresensk team 7.62, which plays in the Women’s Hockey League. Assistance was rendered to the trainees of the Sambo and Judo Wrestling Sports School, for whom the company purchased sportswear and sports equipment.