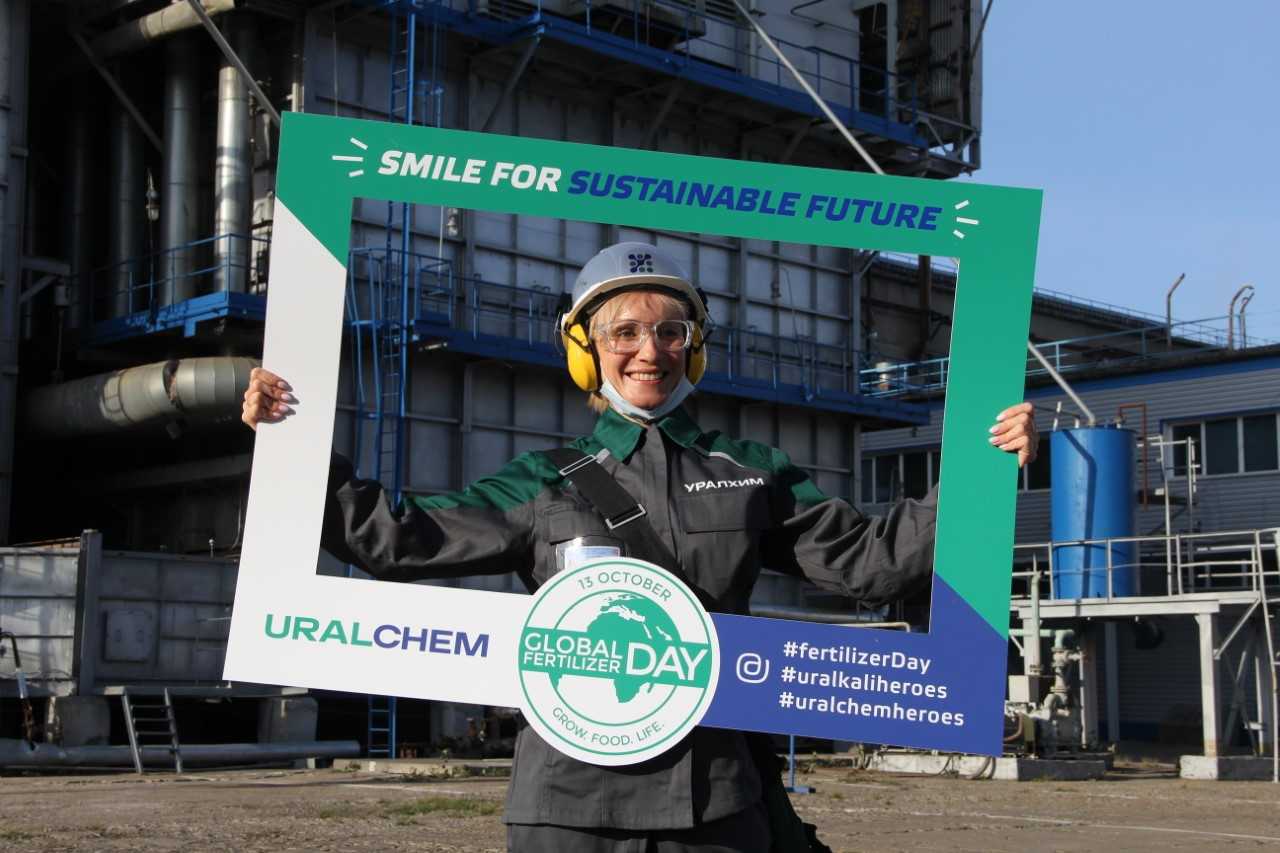 Uralchem, one of the largest companies in in the Russian and the CIS market of nitrogen and phosphorus fertilizers, and Uralkali, a world's leading potash producer and exporter, celebrated the Global Fertilizer Day. The employees of the companies congratulated their colleagues from the International Fertilizer Association (IFA) by joining the “Smile for Zero Carbon Future” flash mob.

At the sites of Uralchem ​​and Uralkali’s branches and divisions, employees took selfies with a special photo frame and sent greetings to their colleagues around the world by posting on social networks using the #fertilizerDay, #uralkaliheroes, and #uralchemheroes hashtags. In addition, within the scope of the event, anyone could offer their initiative for the sustainable development of the company.

Global Fertilizer Day is celebrated on October 13. In 1908, a patent was registered for the process of ammonia synthesis from air. This method has had a significant impact on the development of agriculture in the world, increasing the efficiency of land use. During this time, the widespread introduction of agricultural technologies has saved millions of people from poverty and hunger, allowing our world to grow and develop to the today’s level.

At the same time, FAO and the UN expect global food consumption to increase by 70 % by 2050, while the ​​agricultural land area will grow by only 10 %, so agriculture should be much more efficient.

Dmitry Mazepin, General Director, Uralchem, Deputy Chairperson of the Board of Directors, Uralkali:

It is absolutely obvious that the forecasts of international organizations are coming true – the food consumption grows much faster than the area of ​​agricultural land does. As a responsible manufacturer, Uralchem is actively looking for ways to solve the food problem. The company is constantly working to improve the efficiency of its products. The product range expands taking into account the latest market trends and the requirements of modern farmers. In addition, today we pay great attention to close interaction with farmers to improve their competencies and ensure an increase in yield from each hectare of land. To increase the efficiency of its clients' business, Uralchem ​​helps to optimize the nutritional systems of most crops, advising on the selection and use of products.

In 2015, the UN General Assembly developed a set of 17 interrelated goals as a “blueprint to achieve a better and more sustainable future for all”. These Sustainable Development Goals are of paramount importance for the planet and humanity. IFA and its members find them to be a very useful tool for promoting more sustainable fertilizer production.

Uralchem ​​has committed to contribute to the sustainable development of the society. In 2019, IFA recognized the PMU branch of Uralchem in Perm as the best in the world for responsible production management among the producers of mineral fertilizers. The plant received the IFA SHE Excellence Gold Medal. Based on the results of the IFA audit in 2020, the company managed to improve its assessment and confirm the title of Stewardship Excellence. Note that since 2013, there has been a continuous process of increasing the efficiency of ammonia production. In addition, PMU products help to reduce CO2 emissions: Perm carbamide is superior in purity to analogues, since the biuret content in it is much lower than allowed by the Russian state standards (GOST). Due to this, the urea produced by the PMU branch may be used for the manufacture of a reagent neutralizing the exhaust gases of diesel engines of trucks and sea vessels. In 2020, the own production of the reagent was launched at the site of the OSP Yartsevo, which is part of JSC Voskresensk Mineral Fertilizers. The production capacity is 1,800 tons per month with the possibility of increasing up to 2,500 tons.

In 2021, the Azot branch took part in the Russian Quality program. Potassium nitrate of the CX grade, which is a valuable ballastless fertilizer containing potassium and nitrogen, is recognized as corresponding to the highest quality level. It has been used by agricultural enterprises for more than thirty years, and is considered an efficient top dressing. In 2020, when conducting field trials of UAS fertilizer by the All-Russian Scientific Research Institute of Agrochemistry named after D. N. Pryanishnikov, experts gave their opinion that using of this type of fertilizer is efficient.

Since 2013, KCCW has been in a continuous process of increasing the efficiency of ammonia and nitric acid production. Investment projects are regularly implemented to improve the quality of products, which annually become laureates and diploma winners of the 100 Best Goods of Russia and Russian Quality competitions. In 2020, Concentrated Calcium Nitrate, Anhydrous Calcium Nitrate, Sulfonitrate NS 30-7 were awarded diplomas and certificates of the World Quality program. Participation in the program confirms the products fitness to compete with the best world analogues.

In 2020, Uralkali developed and its Board of Directors approved a 5-year ESG strategy. The company received a high initial score in the independent international ESG rating SAM S&P Global, gaining 52 points, which exceeds the average rating for the chemical industry (36 points). The company's rating is also higher than the rating of 71 % of chemical manufacturers who took part in the survey in 2020.

In 2019, Uralkali received the IFA Product Steward Excellence status under the IFA Protect & Sustain international standard. The certificate confirms the excellent level of management at all stages of production, transportation, and marketing of potash fertilizers, as well as adherence to the best practices in matters of production safety and environmental friendliness of products. In 2020, Uralkali was awarded the IFA Gold Medal for responsible operations.