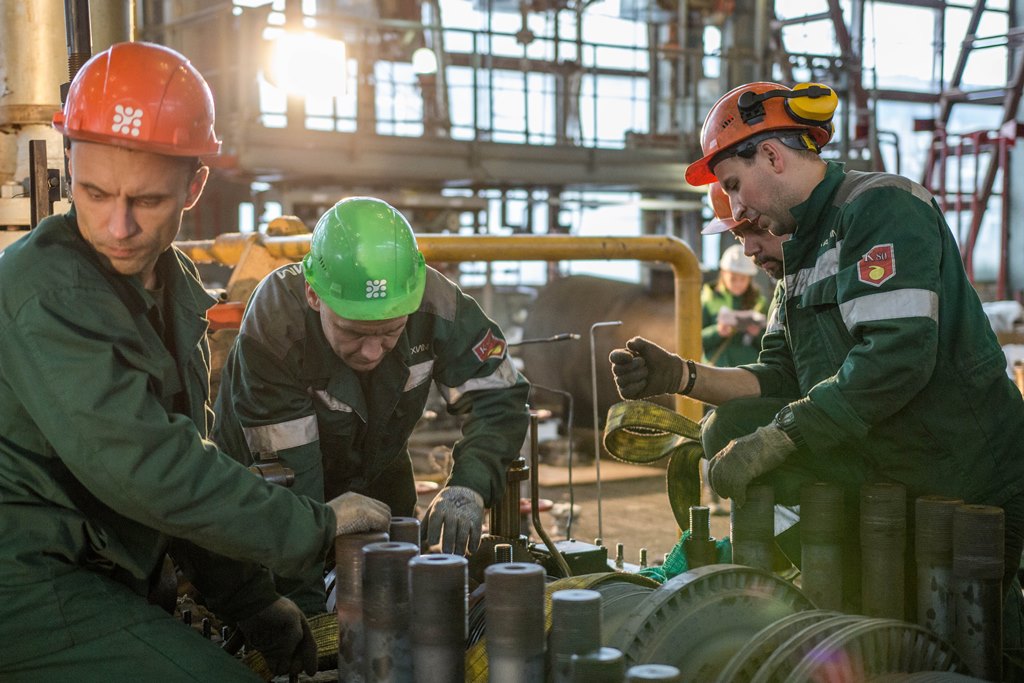 In 2016 the Holding allocated 1,837 million rubles for its enterprises’ repair and maintenance campaigns. The majority of the works was completed in November this year.

Azot Branch
The Azot branch carried out several stages of shutdown maintenance, the latest of which was finalized in October. The budget for the repair campaign exceeded 660 million rubles.

In October, 1A Shop replaced its pumping unit. 1B Ammonia Shop, one of the key production assets of the Azot branch, completed a large project to upgrade the section dealing with ammonia synthesis through implementation of the syngas dehydration system supplied by the French company CEAMAG. The goal of the project was to ensure the stability of the ammonia recovery process, reduce power consumption rates and increase production.

1B Shop also completed works related to upgrading the compressor. This is one of the shop’s main machines, which completes the multi-stage process of ammonia production – compressing the gas prior to synthesis reaction. New parts and components of the compressor were manufactured by Dresser-Rand, France. The scheduled overhaul was also completed at one of the ten units of the weak nitric acid shop.

Kirovo-Chepetsk Branch (KCHK)
The 2016 repair campaign, with a total budget of 600 million rubles, was completed in November.

This year the branch carried out two main stages of overhauling large-tonnage units of ammonia, acid and ammonium nitrate. In the first stage the branch completed an overhaul of АС-72/2, АК-72/1 and АМ-70 units. In the second stage, АС-72/1, АК-72/1 and АМ-76 units were overhauled.

Shop No. 57 completed repairs of all processing machines of the АС-72/2 ammonium nitrate production unit. The shop also carried out disassembly and technical servicing of turbine-compressor unit GTT-12 in the АК-72/2 nitric acid line. New evaporators and steam super-heating packages of the KN 80/40 boiler were installed. The second stage resulted in overall shutdown maintenance of the АМ-76 ammonia unit.

This year’s list of repair and preventive maintenance operations contains more than 700 inventory items. These include works related to inspection and substitution of critical valves on the process pipeline and steam conduits, as well as connection of a new gas pipeline to the manifold.

Completion of the upgrade of the natural gas compressor in the PMF Ammonia production shop became one of the key events of this year. In the course of the overhaul, the specialists replaced all internal components of this production unit.

The natural gas compressor upgrade is part of a large-scale program of modernisation of the ammonia unit, which commenced in 2013 and was successfully completed this year. The following results were achieved: operation of all production units stabilized over the year, average daily production yield of ammonia unit during the year gained 92 tons compared to 2012 and totalled 1,720 tons a day, while the specific volume of gas consumption was reduced from 1,095.2 to 1,056.9 cubic meters per ton of product compared to 2012.

From September to October 2016, the company performed an overhaul of the Contact-Process Sulfuric Acid Shop, Wet-Process Phosphoric Acid Shop №3 and Ammophos Shop №2. Specialists completed technical maintenance, repair and rectification of defects in elevators, conveyors, shaker separators and absorbent systems and replaced the crown gears of the cylinder driers.