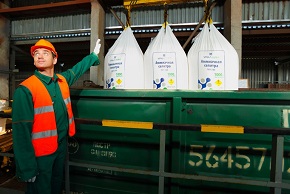 Moscow, November 7, 2016. From January to September 2016, URALCHEM Group produced 4.4 million tons of marketable products, which corresponds to the amount produced in the same period last year.

With Voskresensk Mineral Fertilizers OJSC running at full capacity, 105,000 tons of mono-ammonium phosphate was produced, which is 238% more than in the first nine months of last year, while production of complex fertilizers increased by 14% totalling 563,000 tons across the Group. Production of ammonia nitrate, the most in-demand product on the domestic market, generally remained at the same high level as last year. Production of marketable ammonia and urea decreased slightly due to repairs and upgrades of the production units.