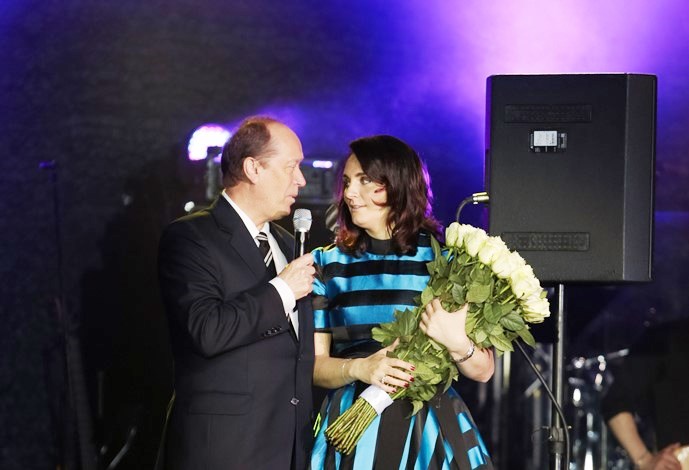 Elena Vaenga, a favourite with the public, gave a holiday concert in Jurmala. Intars Busulis, one of the most popular Latvian singers, was the special guest. The tour was organized by ART Forte Production Company to celebrate Russia Day; the tour was supported by the Embassy of the Russian Federation in Latvia, URALCHEM, and Severstal. The First Baltic Channel provided information support.

Ambassador A. A. Veshnyakov of the Russian Federation to the Republic of Latvia welcomed guests in a traditional manner and commented on the importance of events that enhance cultural relations between Russia and Latvia.

Elena Vaenga is known for combining very different musical styles and genres in her creative work, melding them together into one medium. During her live concert in Jurmala, the singer presented guitar poetry, Western European music (funk, soul, bossa nova, folk rock, rock), and various folk music samples. Vaenga also introduced the Latvians to a special genre—old Russian lyrical songs—by performing songs by Vertinsky. One of the memorable moments was when Intars Busulis appeared on stage and sang some of his most popular hit songs together with Elena Vaenga.

Dmitriy Konyaev, URALCHEM CEO: “For several years, popular Russian singers have given their concerts on this day in Dzintari Concert Hall. We are glad that our support helps Latvian spectators to become more familiar with the work of Russian artists. Participation in a cultural exchange is an important component of the social policy of the company, which also includes support of charitable and social projects in the areas where our company operates.”

Vaenga is seen by many as a unique musician. She managed to create her own original image and style on the Russian modern stage, which, in combination with enormous hard work, brought her success. The singer regularly tours in Russia, Belarus, Kazakhstan, Azerbaijan, Baltic Republics, Germany, the USA, Israel, and Greece, and the tickets are routinely sold out.

Jazz and pop singer Intars Busulis has been well known in Latvia for quite some time, but he became even more popular in Latvia, as well as outside the country, in 2014, when he participated in The Voice, which was aired by the First Channel in Russia. Then he took part in another popular show, Perfect Imitation. He became acquainted with Elena Vaenga in 2013, and the singers have several songs, which they sing together in both Russia and Latvia. One of the songs is included in Busulis’ solo album, Gravitation, which was released last summer.

URALCHEM began its charity activities in the Republic of Latvia in 2012. Every year the company spends hundreds of thousands of euros on social and charitable events in Latvia. Both in Russia and in Latvia, URALCHEM gives preference to children-related charity projects, such as financing of treatment and rehabilitation of critically ill children and support of educational institutions as well as artistic and cultural projects.

As for culture, URALCHEM is primarily aimed at strengthening the cultural ties between Russia and Latvia as well as promotion of the best parts of the Russian cultural legacy. In Latvia, URALCHEM supported the first concerts of the Philharmonic Orchestra and Ballet Company of Mariinsky Theatre, the Russian National Orchestra conducted by Mikhail Pletnev, Igor Moiseev Russian Folk Dance Company, Mariinsky Theatre’s presentation of its opera The Enchanted Wanderer, and performances at Evgenii Vakhtangov’s Theatre.