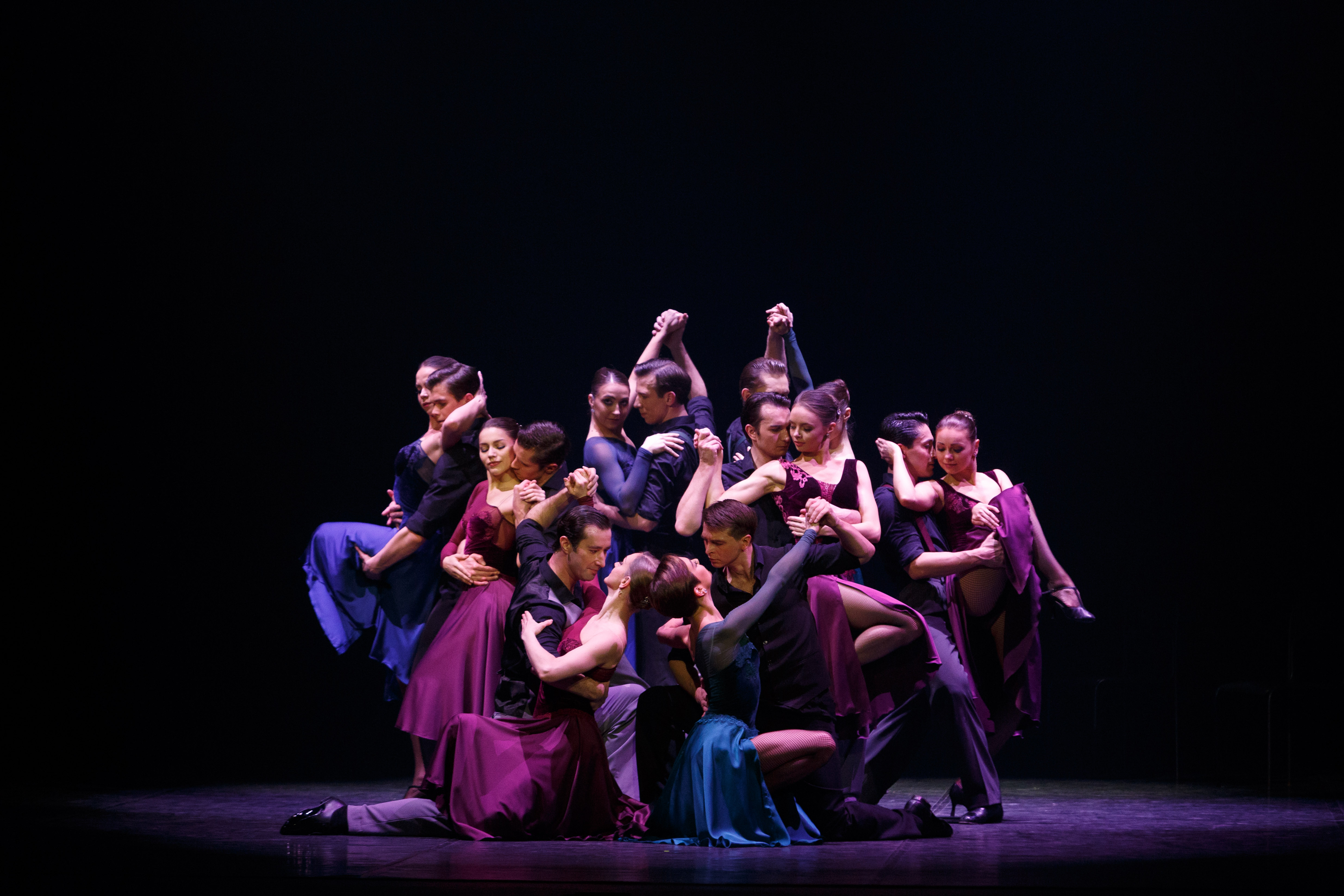 On 11 March, the legendary Igor Moiseev Ensemble presented on the stage of the Latvian National Opera to the Riga audience a new programme, ‘Tango Del Plata’, a dance performance staged by Argentinean choreographer Laura Roatta. The concert tour was organized by ART Forte Production Company, with the support of URALCHEM and Gazprombank.

Igor Moiseev State Academic Ensemble of Folk Dance has performed in Riga for the fourth time. This year spectators were offered a premiere, ‘Tango Del Plata’, a dance performance, which tells the story of the tango from the very beginning to the present day. This show was staged by the famous choreographer from Argentina Laura Roatta. For the first time, she saw the ensemble on stage 40 years ago and since that time dreamt of a joint performance. The difficulty was that Russian and Argentinean dancers have different techniques, which is why Igor Moiseev’s performers had to learn a lot from scratch. The mythical tango goddess Venusina is at the heart of the show. As the creator of this dance of passion, she is endowed with magic power to connect the hearts of lovers. I. Moiseev Ensemble showed the passionate temperament of the Argentine tango and once again proved to be the best.

For the first time in Latvia, the performers presented Jewish Dancing Suite ‘Family Joys’, a real gem in the repertoire of the renowned ensemble. It was supplemented by the ‘golden classics’, dances of various nations. The concert programme included Russian, Greek, Spanish, Adyghe and Argentinean folk dances, which are all very popular with audiences. On 13 March the Ensemble will perform in GORS concert hall in Rezekne.

‘Our Company pays great attention to charity, including financing international cultural exchange projects. We are happy that our support helps to promote the best examples of the Russian cultural heritage in Latvia. Igor Moiseev Ensemble is one of the most famous Russian dance groups, has performed in front of Latvian spectators a few times already and has enjoyed a very warm reception.’

Igor Moiseev State Academic Ensemble of Folk Dance is the first professional choreographic group in the world with a task to artistically interpret and popularise traditional dances of the world. The ensemble, always demonstrating its unsurpassed skills, has been continuously performing since 1937. The development of the ensemble's repertoire is based on the combination of classical and folk art initiated by Igor Moiseev. For many years, the unique talent of the choreographer and his dancers has been the trademark of Russian art. Because of its unprecedented number of tours, the ensemble is even listed in the Guinness Book of Records. This is the first and only dance group that has performed on the most famous opera stages: Milan's La Scala, the Paris Grand Opera, the New York Metropolitan Opera and others. Since 1943, the ensemble has been training its future artists in its own Dance Academy School-Studio. To date, the team features the eighth generation of performers: 90 dancers and an orchestra of 32 musicians. The director and artistic director of the Ensemble is the national actress of Russia, Elena Shcherbakova.

URALCHEM has been involved in charitable activities in the Republic of Latvia since 2012. Every year the Company sponsors social and charitable projects in the country. In Russia and abroad, URALCHEM gives priority to activities related to supporting children: financing the treatment and rehabilitation of seriously ill children, assisting educational institutions and supporting programmes in the field of art and culture.

URALCHEM aims to strengthen ties between Russia and Latvia and to promote the best examples of Russian cultural heritage. With support of the company, the Symphony Orchestra and the Ballet Troupe of the Mariinsky Theatre, the Russian National Orchestra conducted by Mikhail Pletnev performed in Latvia for the very first time, while Igor Moiseev Folk Dance Ensemble performed three times. The Company also assisted the following performances: The Enchanted Wanderer opera by Mariinsky Theatre, Yevgeny Vakhtangov Theatre and Sovremennik Theatre tours and a show by prima ballerina of the Bolshoi Theatre Svetlana Zakharova, along with concerts by Pyatnitsky Choir, Diana Arbenina and Yuri Bashmet.