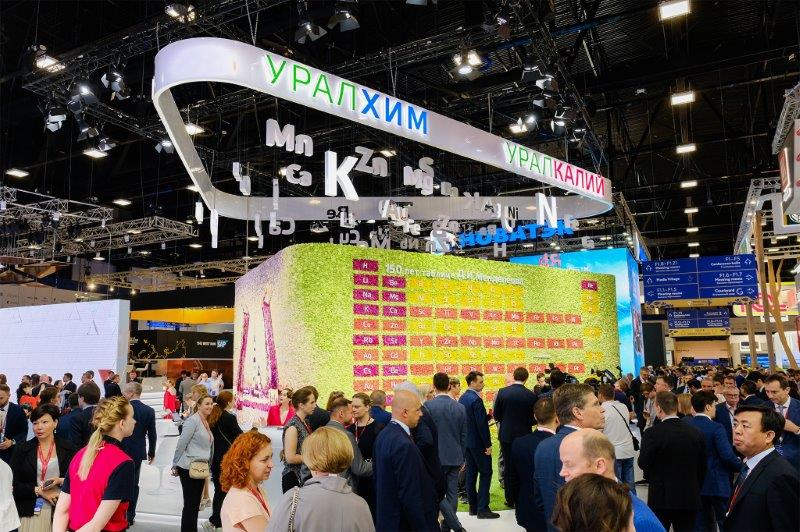 The forum resulted in a number of important agreements with RZD, Siemens, the Ministry of Industry and Trade, the Moscow region concerning the processing of phosphogypsum dumps in Voskresensk and the Perm region regarding the establishment of a research and education centre. Company representatives took part in the plenary session attended by Russian President Vladimir Putin and were involved in panel discussions on regulatory guillotine issues and cooperation between Russia and Africa.

URALCHEM – Uralkali joint exhibition booth attracted many visitors because of its periodic table design. It was no accident, as 2019 marked the 150th anniversary of Mendeleev's table. The exposition was entirely made of natural roses.

In particular, the booth was attended by Denis Manturov, Minister of Industry and Trade of the Russian Federation, Vladimir Zhirinovsky, leader of the LDPR fraction, Rustam Minnikhanov, President of Tatarstan, Vladimir Ilyukhin and Maxim Reshetnikov, governors of Kamchatka and Perm region, and others.

Denis Manturov, the Minister of Industry and Trade highly appreciated the exposition and spoke about development prospects of the chemical industry. 'Our priority task is to enhance international cooperation and to increase the export of chemical products. This is confirmed by a number of new agreements, including with URALCHEM and Uralkali,' he said.

Dmitry Mazepin, Board Chairman of URALCHEM, Deputy Board Chairman of Uralkali, commented on the unusual booth design. 'First of all, we are a chemical company, we produce and sell mineral fertilisers,' he explained. 'However, since 2019 has been declared the International Year of the Periodic Table, we could not ignore the personality of the great Russian scientist. Therefore, we created Mendeleev's table from roses. The other part of the booth was dedicated to the city hosting the forum, as drawbridges are among the symbols of St. Petersburg.'

'This is a new region, a large continent with great potential. We have already met with the leaders of Kenya, Angola, Zimbabwe, Zambia and Mozambique. We would like also to discover the market of Ethiopia. In October, a large Russia-Africa summit will take place in Sochi with the participation of URALCHEM and Uralkali. This will become an important signal to our partners saying that Russia is coming back to Africa after 30-40 years to foster the development of African nations, especially in the field of agriculture,' Dmitry Mazepin concluded.