Turnkey solutions for your business
Home
About URALCHEM
Assets 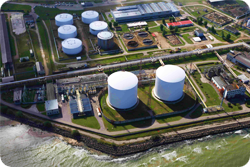 Ventamonjaks is the largest liquid ammonia transshipment terminal in the Baltic Sea with an annual capacity of 1.5 million tons located in the ice-free port of Ventspils. Three deep-water berths can accommodate vessels of 60,000 dwt. Uninterrupted operation of the terminal makes it possible to handle up to 250 railway tanks a day.

The Company’s quality of work in the management and environmental protection is confirmed by the received ISO 9001:2008 and ISO 14001:2004 certificates, as well as the Maritime Administration of Latvia certificate that confirms the compliance of the Company’s security system with the International Ship and Port Facility Security Code (ISPS code).